FREE SHIPPING ON ORDERS $100 OR MORE Platinum is hypoallergenic and is four times more durable than gold. Its silvery-white surface is comparable to white gold, although it’s noticeably heavier.

Often heralded as just as beautiful as the gems it displays, platinum boasts a silvery-white luster that imparts unmistakable elegance and blends well with a variety of metals and stones. Four times stronger than gold, platinum is renowned for its hard-wearing properties, resistance to damage and wear, and its substantial heft.

Considered among the most pure and precious metals used in modern-day jewelry making, platinum has become synonymous with luxury and longevity. Because of its hardness and durability, pure platinum is often mixed with other metals to make it more malleable. The most common alloy metals paired with platinum are copper, palladium, rhodium, iridium, and titanium.

Although some alloys may be billed as platinum by jewelry sellers, there are stringent requirements for what constitutes a 'pure' platinum piece. Only metals marked with a 950 or 900 purity designation are considered high-grade platinum. Alloys containing a lower ratio are often used to make jewelry, but these pieces don't impart the same high standards of quality, longevity, or beauty. At Brilliance, we use only the purest platinum alloys to craft our fine jewelry.

Pieces marked with a 950 purity are a blend of 95% platinum and 5% alloy metals (usually ruthenium , copper, cobalt, iridium, rhodium, or palladium). 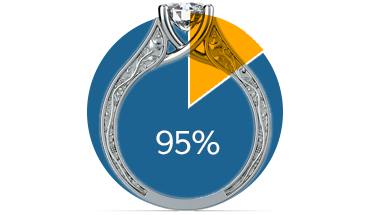 Pieces marked with a 900 purity consist of 90% platinum and 10% alloy metals (usually ruthenium or iridium). 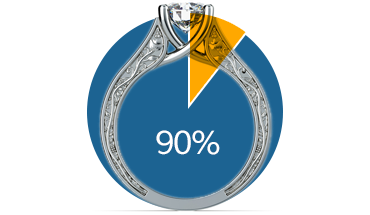 Platinum is a metal with a rich and deep-rooted history. Mined in Russia and South Africa, it was first used in decorative applications in ancient Egypt more than 3,000 years ago. Preferred for its remarkable strength and longevity, the metal was used to adorn Egyptian coffins. The South American Inca Indians also made use of platinum to decorate their artifacts. With the Spanish conquest of South America, the metal's value was diminished, as the Spanish people considered it to be far inferior to silver. It wasn't until the 1800s that platinum began to reclaim its original status as a precious and treasured metal. Today, it's regarded as the premier choice for the setting of fine diamonds and other gemstones.

At thirty times more rare than gold and four times stronger, platinum has become synonymous with luxury and longevity.